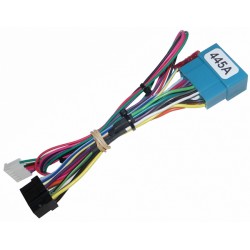 Fully Plug-n-Play 2-channel Bridge Mode operation is now available with this special harness for use with the Alpine KTP-445A plug-n-play power amp.  Yes, you heard right, you no longer have to buy the "universal" KTP-445U amp and do a lot of wire splicing in order to get the higher power output of 2-channel bridge mode.

Even though Alpine does not advertise it as such, the 445A plug-n-play power amp was designed to be capable of 2-channel bridge mode - they just didn't add the switch to implement it.  But by re-wiring the output you can utilize all 4 internal amplifiers to drive the front speakers.  One of the photos above shows how it's done, or take the easy route and buy this harness.

Only works on DCIs with a 6-pin connector (2012 or later). DCI (sold separately) is needed to convert S2000 dash control signals into head unit commands